Being a Dad…the best role I've ever had.

Archive for the ‘School’ Category

Wonky LED’s and an amazing brain

My wife is home schooling Preston, as the local school system could not really cope with his unique needs and abilities.  Children who are on ‘the spectrum’ are not like neurotypical children.  In Preston’s case, he not only is bright, but gets bored and pays attention to things that most people would not, like the order of books on a shelf or a sign that should not be up. Things like that. So, because his needs were not being sufficiently handled by the school system-and, don’t get me wrong, Hanover Schools are excellent, for most.  I have nothing against this school system or even Preston’s former school–they just are not equipped or staffed to handle one, let alone many-which they claim they do.

Anyway, as part of Preston’s home school curriculum, I am teaching him programming and how computers work.

To my delight, he has a knack for the programming part. I think he will for the hardware as well, though his mind wanders a great deal when I am teaching him about the hardware.  A good programmer should know the basics of how the computer works.

Along those lines, I dug up a small computer (one with very little capabilities called an ‘Arduino’, they are used for controlling things) and an old laptop and we made two LED’s blink in varying patterns and duration.  While he got a bit bored while I was setting it up, he got very excited when we made the LED’s do things.

That was fun, but it also showed me a bit about his very anal attention:  those LED’s HAD to blink at precise intervals.  He could not cope with random intervals of on or off. He also did not like the brightness. I explained that, while we can control the brightness, we were not doing so then, that was for another lesson.  He, reluctantly, went along with that, but those LED’s blinking differently, he could not take that.  So, we changed the program so they would blink at a constant rate. I had him tell me how to do that.  With only a few lessons, he was able to do that.

It is amazing how Preston reasons things and how well he remembers. This was the first lesson in a couple of weeks and he remembered the last things we did–I did a verbal quiz and he was 100% correct.

Of course, the notion that a dollar’s worth of parts would provide he and Xander with so much fun is, itself, amazing. Like his brain.

I love that kid.

Watching him become an adult 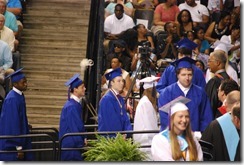 June.  The start of the summer season, vacations starting up, school ending and graduations.  Among the events that have taken place, for me, in June…my oldest son graduating from high school and turning 18.

I thought the graduation was going to be tough for me. I was very proud of him.  Watching him walk across the stage, getting his diploma and remembering a time when we sure if it would ever happen.  When he was a child, Chase had an immune system deficiency and took several meds and received monthly, then weekly infusions. We never knew what the long term effects of the medication he took and the blood infusions he received would do. There was even concern on how it would all affect his cognitive ability.  Well, I am happy to report that it all kept him alive as well as not doing anything to hamper is learning and mental growth.

He has turned out to be a fine young man.

It seems to me that just a few short years ago he was five and just starting school. But, I woke up one day and he’s 15 and in high school.  How in hell did that happen?

Now, he’s 18.  Out of school, driving and has a job.  Soon, he’ll have two jobs as he will be a ‘scare actor’  at a local theme park for the Halloween season.  My otherwise quiet son will be scaring the pants off of grown people and kids alike.

He’s good at it too as we saw him in action last season.

Over the years, I’ve watched him develop and grow. Often, telling him he needed to stop that nonsense and be my little boy forever.  Of course, that didn’t happen.  Well, the stop growing part, anyway.

I think back at his many goals…like being tall enough to reach the light switch on his own.  Being able to read just enough so he could play Rollercoaster Tycoon while daddy was at work (I used to put him on my knee and play the game with him. We built many, many amusement parks together.) Getting tall enough to ride the Tomb Raider.  Being able to ride to ride the Volcano. Wishing he was in high school. Wishing he was out of school, etc.

And watching the awe and amazement coming from him when he discovered something new as well as having those goals met.  Watching his excitement when he was able to reach the light switch, play the games, ride the rollercoasters and tomb raider.  The pride, walking across the stage, in getting his diploma.  Even today, he still gets excited. Not as much, perhaps, as he used to, but he does. (Seeing the joy on his face when we went back to Disney World was just as cool as it was the first time, some 12 years ago.)

Time doesn’t stop and Chase will, eventually, move on and, hopefully, find out how awesome it is to be Dad. And, it has been awesome. I wouldn’t trade it for anything.

An arduino for the first of us

A blog that got hijacked by a horse

The David and Christina Show
ultimatemindsettoday

Cooking with a Wallflower
MCU on Eclipse

Everything on Eclipse, Microcontrollers and Software

Food for the gamers soul

A blog full of humorous and poignant observations.